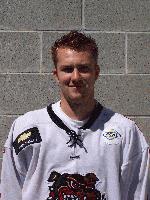 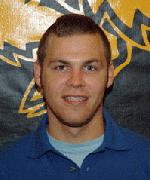 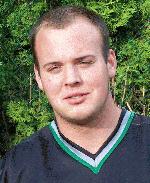 Hope summer is going well for all of you. Busy and boring at the same time for me. We are heading back to Manitoba for some holidays this week, so updates will be scarce for a while. First time home in a couple years for Sarah and myself, so it's certainly deserved.

Speaking of Manitoba, it's where the Dogs have found there new trainer. Avi Walker joins the team coming from the University of Manitoba Bisons. Read the release from the Bulldogs website here.

The Bulldogs also announced the signings of Scott McNicol and Cody Lockwood.

Welcome to the team Avi, Scott, and Cody.

Also, the Bulldogs announced that they have traded Brad Reaney to the Fort McMurray Oil Barons of the Alberta Junior Hockey League for future considerations. Read the release HERE. Personally, I'd like to wish Brad all the best in Fort Mac. Brad was a great guy and great teammate. Never short of character.

Alright, now off to the highlights. Time for the last highlights I think I have of 2003-2004. Still remember the game like it was yesterday. I had no voice left, and of course it's those games that end up going to double overtime.

And, the exiting conclusion in double overtime PART 2

Now, onto some "forgotten" highlights podcasted from this past season. It's from game two of the Bulldogs vs Salsa Island Final series. The Bulldogs would end up winning the game 13-2.

It would be the last game they would win. At the time, no one would've ever believed that would be the case. I'm not going to get into any second guesses as to how or why the season ended. I've done that enough and I'm sure fans and players have done that too. I'd rather enjoy thinking back to the great moments. And was this game ever full of them. When it comes down to the Multiplex and how crazy it is, it seems to be even crazier when the Dogs score in bunches. Last season off the top of my head I can remember several instances of two goals in a matter of moments, and three goals in 5 minutes. Williams Lake, for those that don't remember it. Look back to past blog posts to hear the podcast of that crazy game. This game though, was even more crazy. 4 goals. One after another, after another, after another, after another. And the crowd got crazier and crazier and crazier, and so did I. Included is Tyler Ruels first ever hattrick goal, in his 200th career game. Take a listen, and remember the good times in the Dog Pound. Hope you enjoy.

I will have another poll up soon, and anything else I can think of. Keep posting and emailing and reading and checking the blog!

PS- Don't forget to CLICK The ads at the top! 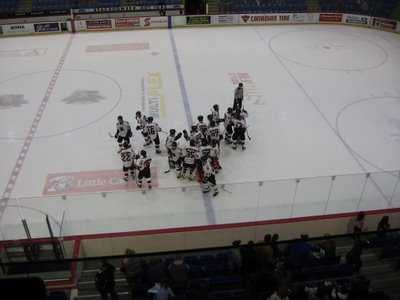 Hello, thanks for stopping by the blog. Anyone else sick of the heatwave? wowzers. Spent the entire weekend by the pool trying to beat the heat. Thanks Judy and Gary! Hows that for a picture? Historic, for the Bulldogs at least. It may be the only picture of this moment that exists. The on ice celebration of the last win of the winning streak, an incredible 2o in a row. A third of the season. The streak ended the next night in Merritt. Seems like long ago, but I still remember it. 3-2 was the final score if I remember correctly. Jordan Kremyr snuck past the Viper centreman off an offensive zone face off in double overtime, and beat the Viper keeper unassisted for the game winner. I grabbed the camera while doing the play-by-play and just had to take a picture.

Thursday was a big day for the Dogs as they announced their new coach, Dave Whistle. Great name for a coach. The Dogs also announced that Rick Schvienk will return for a third year as assistant coach. In my opinion, Rick will be vital this year in passing along what he's learned over the last two seasons with Jim along to Dave. Not only that, I'm sure Rick will play a big part in helping Dave get accustomed to the Dogs organization, their roster, and the BCHL.

Now to the poll. I asked this question-Which 05-06 Bulldogs player are you going to miss watching most? You can click HERE to read the results.

Now onto the more "blasts from the past" I dug up. Below is a link of game highlights from game 1 of the 2003-2004 playoffs. I remember the game like it was yesterday. It was my first Bulldogs playoff game broadcast. Game 1 was in Duncan against the Caps. The Capitals finished first on the Island after being out the Clippers on the last game of the regular season. If you remember the last 2003-2004 highlights I podcasted, the Bulldogs beat out the Victoria Salsa for 4th on the Island on the last game of the regular season with a victory at Bear Mountain Arena. The Bulldogs vs Capitals matchup didn't look like a good one for the Dogs. The Capitals handily won the season series, and the Bulldogs hadn't won a single game in Duncan all year. I remember doing the broadcast with barely any voice left. I had a wicked cold and cough and sure didn't sound good. But I pulled through, haha. Enough of the typing, lets get to the action.


Thats it for now. Thanks for stopping by the blog, good luck in trying to beat the heat. Hope you enjoyed the highlights. I'll work on a new poll regarding the best comeback of the year that I will put up soon. Any suggestions, post a reply or send an email.

Repost: Comeback of the year, nominee #1. UPDATED WITH BULLDOGS ROSTER FOR PICTURE 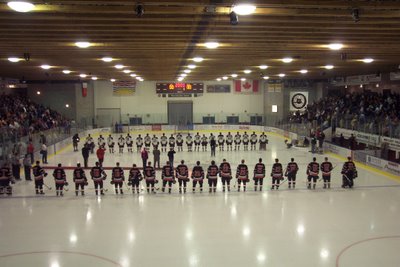 Hello and thanks for stopping by the blog. I'm going to take down the current poll soon. If you haven't voted, do it in a hurry!

The next poll will be asking "What was the best comeback this season?"

I'm asking you to think back and suggest your own. I'll see which highlights I can find. This one is still one of my favorites. The Dogs were down 4-0 in the first period, and called timeout to right the ship. If there was ever a time for the crowd to sour on the Dogs or quit on them, this might've been it. Instead, they rose to their feet and gave a standing ovation. Most of you remember what happened next. Take a listen if you don't. FANS. What a huge advantage, and in my opinion, they played a big part in this comeback.

Email me with your comebacks, or post a reply with a suggestion. Thanks for stopping by the blog!
Hammer

Well, an update on this posting. I've had numerous people emailing me asking about the Dogs and Clippers roster that night. My thanks to Dan and Brandon for getting in touch with a program insert from the first home game in Dogs history. Here's the roster Brandon emailed. Now I just need numbers. I'll see what I can do on that front. Thanks again Brandon and Dan.

Hello and thanks for stopping by the blog!

First off today- the second installment of the 2003-2004 Bulldogs "blasts from the past". The podcast today is the part 2 of the game highlights I originally posted. I'll post both parts again, incase anyone missed the first one. As I said before, as a broadcaster a couple of hundred games later, I can hear the progress made. The work has been worth it!

I have ONE more collection of 2003-2004 highlights that I will podcast in the near future. Playoff memories!

The Bulldogs new website went live this week. I must say- what a good job! Looks great, nice pictures, nice layout. It's still under development for now but it's miles ahead of before. See it for yourself by clicking this link

If you haven't heard yet, Ace has made the decision to not return to Bulldogs broadcasts next year. At the end of the season last year people were posting on the blog asking me "what is up with Ace next year?" I said I wasn't sure at the time, and I honestly wasn't. Sitting on Ace's dock at Sproat Lake enjoying the sun and a swim recently, Ace told me that he'll be taking over as Head Coach of the Alberni Valley Midget Rep Team next season. It's too bad that I won't be able to work with him again, but Ace has made this choice and if it's what he wants to do I'm all for it! It was a pleasure to work with him for 200 or so games, and I know the listeners enjoyed it as I did. He is a walking hockey encyclopedia and has great eyes for the game and great vision for what's happening out there. He did more work than anyone will know in regards to statistical information for the broadcasts, hours and hours of compiling. The trivia questions too. We didn't always agree, but we weren't paid to agree all the time. Most of the time we did though. "great minds think alike" I would say. Or "fools seldom disagree" haha. I don't think the listeners would've enjoyed us agreeing with each other 100% of the time anyway. We were both always honest and genuine. I'll miss him up in the booth but you never know maybe I'll need an intermission guest a time or two. Want to finish todays post by thanking Ace for all his help and contributions to the broadcasts, making them as good as they were. I know he will be proud of the quality of broadcast we provided. Also thanks to Ace for the friendship and the good times on the road. He knows he won't be getting rid of me that easy, not until he puts up a fence around his dock at least!

Take care and thanks for stopping by the blog!