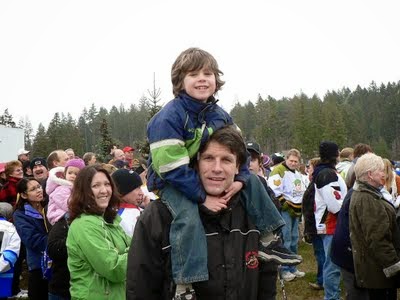 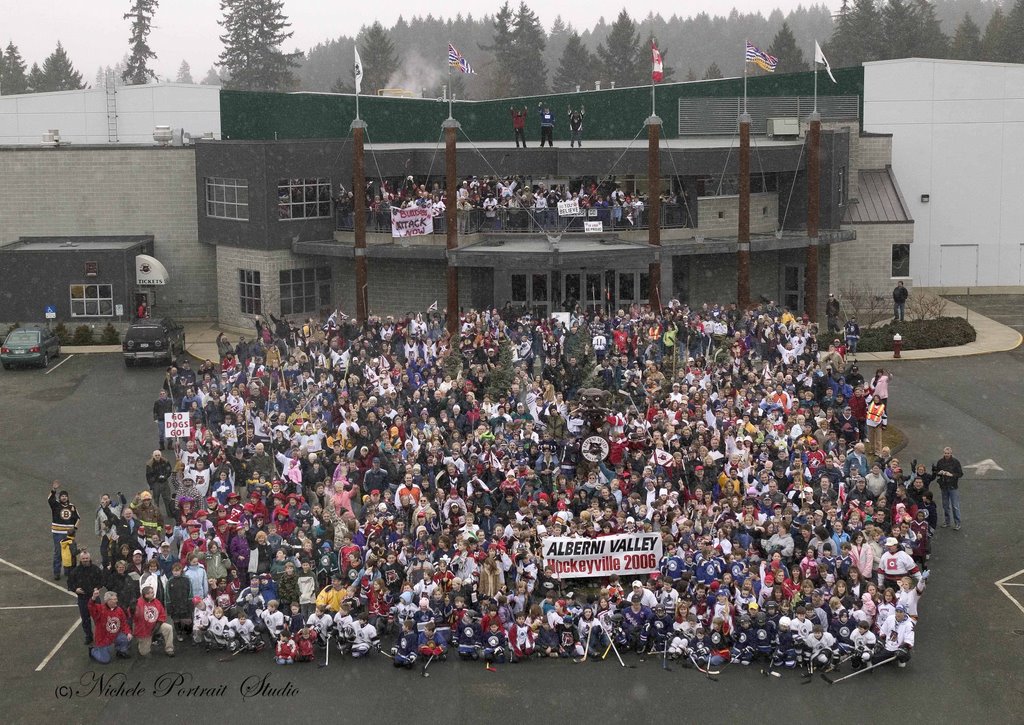 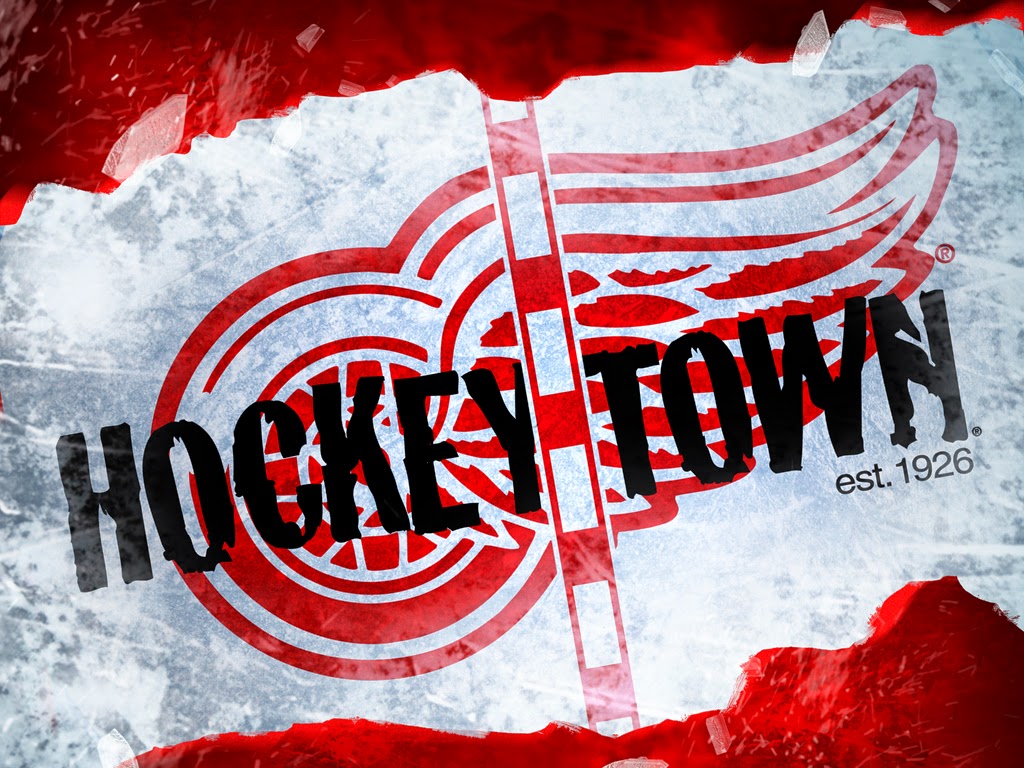 Great news today coming from "Hockeytown" as former Bulldog Head Coach and Port Alberni Native Jim Hiller - pictured above during the iconic "Hockeyville" photo shoot, has been hired as an Assistant Coach with the Detroit Red Wings.

A small error in the Press Release - but it's big to us - as the Wings state that Hiller only Coached the Dogs for the 05-06 season...while that year was certainly the most memorable (20 straight wins, Nationally Ranked #2) he also Coached the Dogs in 2004-2005.

Why not a little 05-06 highlights for some nostalgia! Apologies of course to Bulldogs Goalie Coach Alex Evin!

Here's the link to the Red Wings release....CLICK HERE

Way to go Jim...A great guy, and a great Coach! 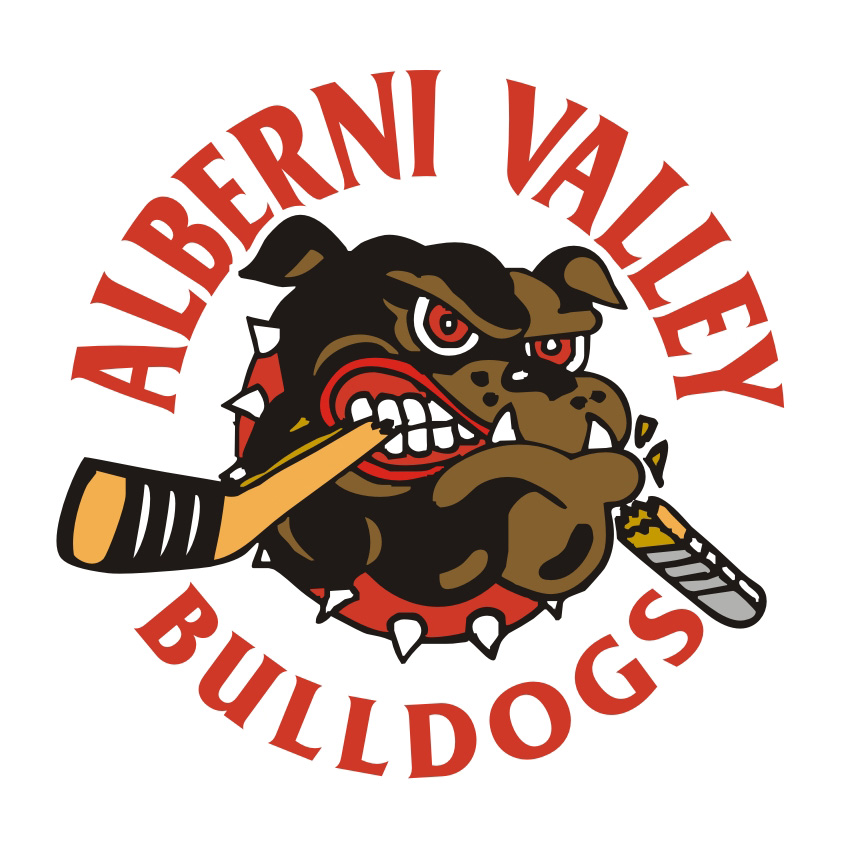 More exciting news today from the Bulldogs, as they announced the acquisition of a veteran #1 netminder from the USHL. Welcome to the Bulldogs Billy Christopoulos! 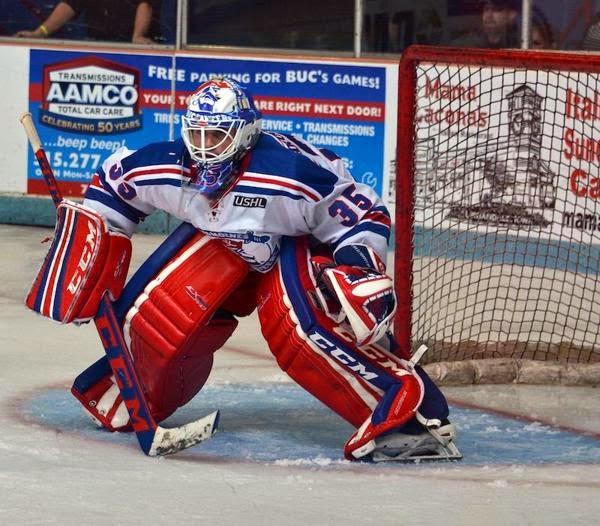 Christopoulos, from Raleigh, North Carolina, played a total of 71 regular season games for the Buccaneers over the last two seasons, posting very respectable numbers on a team that struggled to find offense.

The Bulldogs feel that Christopoulos is a hidden gem on team that failed to make the playoffs in the last two seasons.

“We are excited to welcome a player like Billy to the team,” said head coach and general manager Kevin Willison. “Billy will bring experience, character, and a desire to win. This addition makes us instantly stronger.”

“I am very excited for the opportunity to join Alberni Valley this year as I have heard nothing but great things about the league and the organization,” said the newest Alberni Valley Bulldogs goalie Billy Christopoulos. “I look forward to finishing my junior career with the Bulldogs, and making a run at the championship.” 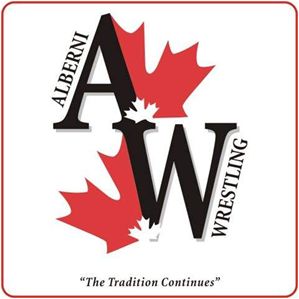 Alberni Wrestling holds their free Kids Camp this week - today, tomorrow and Thursday at the ADSS Gym from 10am to 12noon. It's a great way to get the kids out of your hair for a couple hours parents, while also getting them sweating and who knows, maybe even discovering a new passion!

The permission form that needs to be signed by a parent or guardian is available at the gym, or online by clicking HERE

For more details, read on!

The Alberni Wrestling Club is once again hosting their annual Kids Wrestling Camp July 8-10th in the ADSS gymnasium. The camp will run over three days from 10am to 12 pm and will feature instruction from local coaches, alumni, and high school wrestlers. As well as learning some basic wrestling moves and technique, the camp participants will also partake in fun wrestling themed activities.

Unfortunately, due to the labour dispute occurring in June, high school students were unable to continue the tradition of traveling to the SD70 elementary schools and introducing the students there to the sport of Olympic wrestling.  The Alberni Valley Wrestling Club wants people to know that their popular summer program will continue and their kids camp is being offered once again free of charge.

"When we [the wrestling club] introduce wrestling at elementary schools and the kids camp, we always stress the importance of fun and safety," explains Aaron Keitlah, an ADSS high school wrestling alumni and now a wrestler at North Island College and a coach in the Alberni program. "We always go through a proper warm-up and stretch to limit the possibility of injury and try hard to reveal the enjoyment of wrestling rather than the competitive side."


The camp will be a great opportunity for kids to stay active and meet new friends over the summer break. For some it will serve as a kick start to summer and being a part of the wrestling programs at the local middle schools.  Others may come to simply enjoy participating in the fun games.   The camp focuses on participants in Grades 4 -7, although there are some cases where younger and older athletes have been involved.

Wrestling is a fun and safe way to encourage and teach a healthy and active lifestyle, as well as the feeling of being a part of a team. Participants in the camp will learn the fundamentals of the sport in a playful, fun-centered atmosphere from some of the top development coaches in the province. Our Kids Wrestling Camp is completely free so why not come out and give wrestling a try.

If you already feel like you would benefit from some time away from your kids over the summer, this would be a perfect event to take part in.   The camp will run from 10 am to 12 pm all three days with registration being held each day starting at 9:30.   There are registration forms available online at www.alberniwrestling.ca or at the gymnasium which needs to be filled out by a parent/guardian.  Participants are asked to bring gym strip and clean running shoes. If you have any questions or concerns feel free to contact Nolan Badovinac or Ryan Yewchin at 250-723-1609. 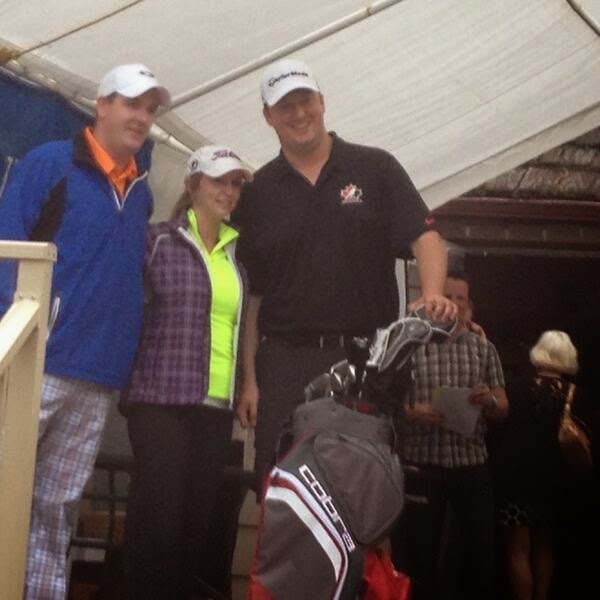 Look at that smile!

I won the clubs two years ago, and my game hasn't been the same since! Here's hoping they do the same for Adam's game, because it could use some work! Only because he's too busy with hockey related matters and putting a winner on the ice instead of shooting under par, of course! 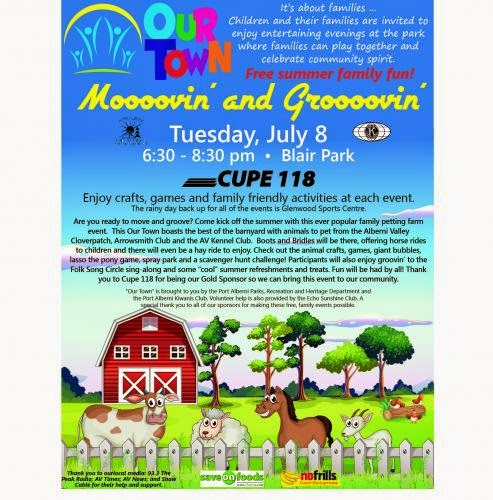 I've always said that it's REALLY summer in the Valley when the Our Town events start. No coincidence that it's a week of consistent 30+ temperatures, and the first Our Town of the year goes tonight! Sorry - that's as big as I can get the picture...but it gives you the jist of what to expect tonight. Animals, folk music, horse rides! All at Blair Park, should be fun! 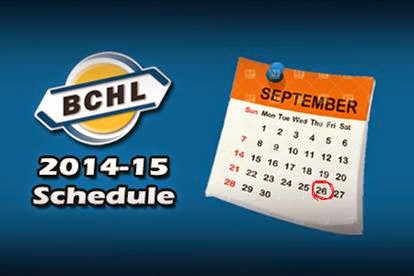 The BCHL released the full 2014-2015 sked today. The Bulldogs Home Opener is Saturday, September 27th when they host Powell River. The Bulldogs and Kings conclude the Regular Season with a double-header in Powell River February 27th and 28th.

Another highlight sees the Bulldogs facing the Kings in a New Year's Eve tilt facing off in Powell River at 5:00pm.

The Bulldogs had best not put themselves in a position to need points at the end of the season like they did last year, as 7 of their final 10 games are on the road, including 5 in a row to end the season. I'm going to go out on a limb and guess no one in the league has more than 3 straight on the road to end their regular season.

(Update - I checked. No other team has any more than 2 road games to end the season)

The positives can be found in the form of multiple multi-game Home Stands of 3 and 4 games on several different occasions.

Another note is how late the season starts due to the condensed schedule. Sept 6-8th or Sept 10-12th was the general ball park for when the season used to get going in the past. Lots of games, in less time to play them. 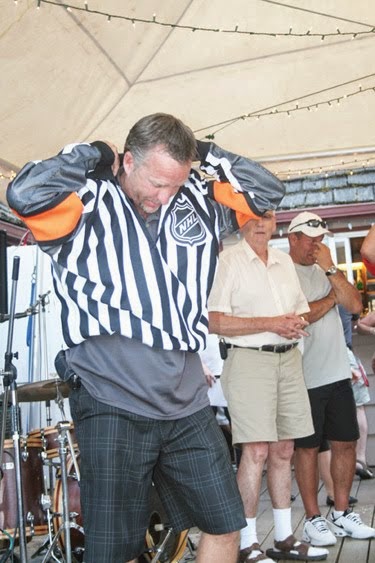 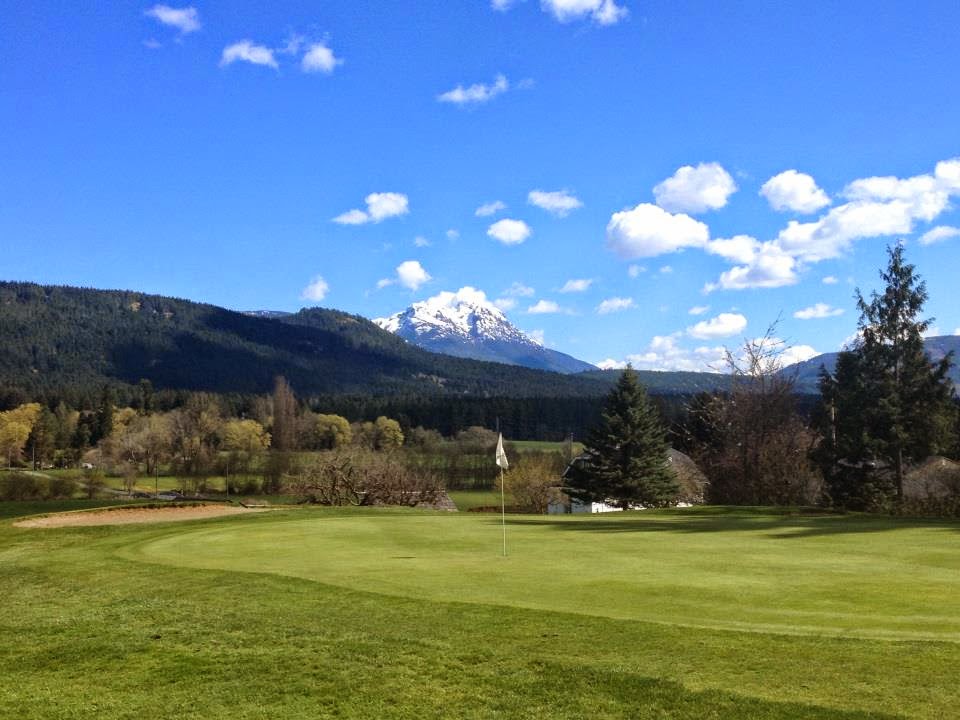 I'm very excited to once again take part in the Alberni Valley Charity Golf Classic tomorrow at the Alberni Golf Club. It's the 21st year for the tourney, which was founded by Rob Shick. To date over $750,000 has been raised for the BC Children's Hospital and a bunch of local charities. Great fun, great times, and a great cause!

The Alberni Valley Minor Softball Association is hosting the Girls U16 Provincials this weekend at the Echo Minor Fields. Action is underway today and continues to the title game at 4:30 Sunday which is followed by the closing ceremonies. It will be some great ball, so I encourage you to get out and check out the action, even if the weather leaves something to be desired!