'Ello all, thanks for checking the blog again! Sorry I've been so lax latley. Had a month of nothing but 3 game weekends all month, and short turn arounds- starting Thursday, ending Sunday. It's been tough to keep up work, better yet this blog. Between the broadcasts, the morning show, and writing for the team website, I haven't even known when one week has ended and another has begun. To make matters really worse, I've had some major headaches happening away from work that have taken up all of my time.....Enough of the excuses! I will make it up to you in the coming days and weeks. Getting caught up now with a Sunday off at the end of last week and just two games this weekend. Heading down to Victoria Saturday to watch a Victoria Salmon Kings game and take a night off. I can't wait!

Two big games this weekend, Langley at home Thursday, then over to Burnaby Friday.

Thanks for stopping by. Sorry for the short update. Just a note to let you all know I haven't forgotten this totally, and I'm still alive!

HIGHLIGHTS HILITES HIGHLITES however you spell it!

Hello and thanks for stopping by the blog. Sorry I haven't posted much latley, just been too darn busy with radio work and bulldog work and broadcast work and holidays and all these three game weekends with quick turnarounds. Not much free time. Today I'm posting highlights from the last 4 Bulldog victories. Mostly just the goals. I'll throw in the obligatory apology for only being able to post what I post. Also an apology to the other teams for not posting THEIR highlights. It's a BULLDOG blog afterall. I'd like to post a full game highlight reel both sides but I just don't have the time or resources to swing it. So I hope what I post will do!

One of the most amazing starts to a game in a while. Highlights of goals, and a couple scraps. Also Jeff Manryk's first BCHL goal. And YES, I do call him "shooter" Why? Well that's an interesting story. Sitting in front of Manryk and Lockwood on the interior roadtrip, I must've heard SHOOTER out of the two of them 586 times over the weekend. I told them that I was going to start swinging, if they didn't settle down with the "shooter" comments every 10 seconds. Jeff then asked me if I would call him shooter on the radio when he got his first goal. We then struck a deal. I agreed to call him "shooter" when he scored on 2 conditions. 1) he scored within the next 4 games. and 2) they shut up with the shooter stuff. Congrats to Jeff for the goal, especially nice in front of his mom and dad who were out from Thunderbay, Ont, for that game. Had the pleasure of meeting them both, great people. Jeff and Cody kept up their end of the bargain, they stopped the SHOOTER all the time, and Jeff then scored. So I had to keep up my end of the bargain. There is probably some story behind shooter that I'd rather not know about.... Great picture of the goal, thanks to Shane Power at www.lastingimagesphotography.ca 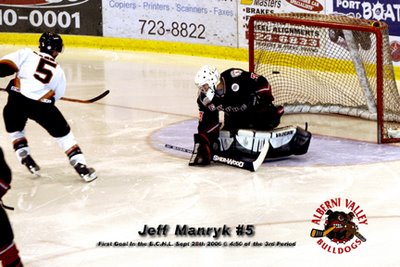 Big win for the Dogs over the Clippers ending their unbeaten run. The biggest thing was the Dogs bouncing back from getting throttled 2 nights earlier 10-4 by the Grizzlies at home.

Good win bouncing back from another ugly defeat at the hands of Victoria, 9-1.

Solid win after a week of changes around the Dogs. Great shift by Harry, I want to see the video of that. Great goals by Ruel and Kremyr as well. Kremyr the nice feed to Ruel for his first one, and a nice finish by Ruel on his second one. The Kremyr goal was huge and REALLY got the dog pound "barking" as the crowd was really roaring.

Thanks for stopping by, hope you enjoy the highlights. Send those pics and comments and emails and whatever else! Love to hear from you EMAIL HERE

Another 4 out of 6 point weekend for the Dogs.

Hello and thanks for checking out the blog! Another good weekend for the Dogs, two wins and one loss. And what a loss it was.....A loss that cannot be forgotten and must be learned from. However the win in the Frank Crane Arena Sunday makes that loss seem more than just one game ago. I'll see if I can get some audio up in the next couple of days. Busy busy getting ready for another three game weekend. I'm PUMPED that I finally have some picture submissions being sent in! I've only been asking for almost a year now, and I've probably received about 10 pictures. First, is a picture from Judy. She says that they layed up CDog before the game.....hope it's not a 4 to 6 week injury for CDog. Must give the Clippers mascot some credit. He's a good one, good natured, always poses for pics and is funny and good to the other teams fans. Great pic Judy thanks for sending. 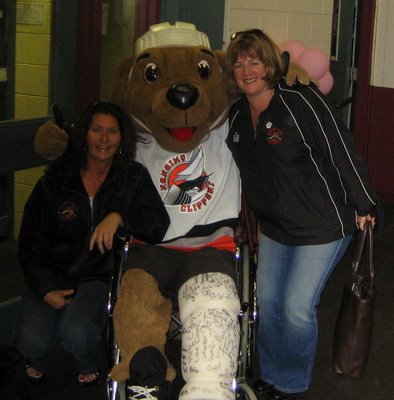 Dogs fans (and TWolves fans) What did they do to CDOG?!


Thanks as well my good bud Dan "the stats man" for sending in the following pictures. It's a new camera, so he says he's working out the kinks. I appreciated the pictures as I didn't bring my camera. Thanks Danno. 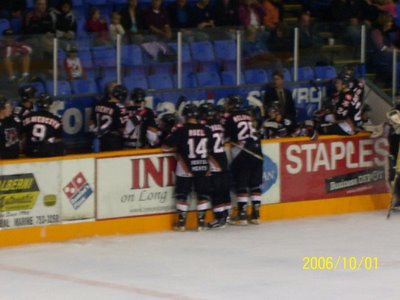 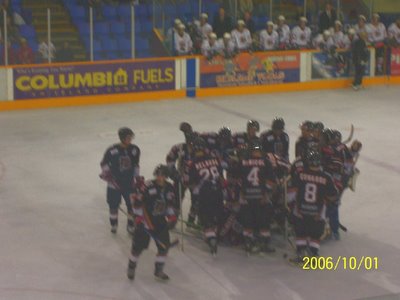 Thanks to you both for the pictures, and thanks for stopping by the blog! Send those pictures in! EMAIL ME

Be sure to check back for more to come as always, send those pics and post those comments.