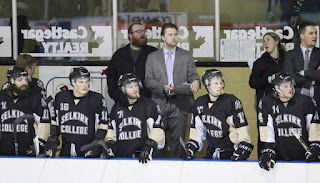 PRESS RELEASE
May 27, 2015
FOR IMMEDIATE RELEASE

Port Alberni, BC – The Alberni Valley Bulldogs are very proud to announce Alex Evin is being added to the coaching staff as a fulltime assistant coach and goalie coach.

Evin spent the last two seasons as the Bulldogsʼ part-time goalie coach while coaching the Selkirk College Saints in the BCIHL as a head coach in 2014/15 and an assistant coach the previous seasons. Evin won three consecutive BCIHL championships with Selkirk College.

Evin grew up in Castlegar, BC and played his entire minor hockey there before moving up to the BCHL. In five seasons, Evin spent time with Powell River, Williams Lake, and Penticton, where he led the team to a Fred Page Cup Championship in 2008.

Over his BCHL career, he appeared in 221 games (including playoffs) and earned a full ride NCAA Division 1 scholarship to Colgate University.

Selected by the Calgary Hitmen 66th overall in the 2002 WHL Bantam Draft, Evin decided to pursue an NCAA scholarship. In 2003-04 he was named to the BCHL All Rookie Team and was awarded the Powell River Kings Academic Achievement Award. After three seasons with the Kings, Evin was traded to the Williams Lake Timberwolves in 2006-07 where he started 54 of the teams 60 games and was awarded team MVP. He went on to play his final junior hockey season with the Penticton Vees in 2007-08 where he set career highs in all
statistical categories. That season he was awarded the Wally Forslund Memorial Trophy (with goalie partner Bryan Mountain), BCHL Top Goaltender, Team MVP, Finalist for League MVP, all in a championship season.

Evin attended Colgate University from 2008- 2012, graduating with a degree in English.

"I am very excited to join the Bulldogs full time,” said newest Bulldogs assistant coach Alex Evin. “As a player, and now as a coach, I have a lot of respect for the hockey program,” added Evin. “The community support is tremendous and I am excited to help the team contend for a championship."

“We are very excited to have Alex join the Bulldogs on a fulltime basis,” said Bulldogs head coach and general manager Kevin Willison. “All his previous experiences along with being able to accelerate our goaliesʼ development will continue to be a great asset for our program,” concluded Willison.

The Alberni Valley Bulldogs continue to be a leader in the BCHL, being the first to use technology that benefits our players. And now, we are proud to have a full-time goalie coach on staff, one that will also serve as an assistant coach and continue to help us develop our talent and move players on to the next level.

For further information or comment on the above story please contact Alberni Valley Bulldogs’ head coach and general manager Kevin Willison
Posted by Hammer at 5/28/2015 08:16:00 AM No comments: