Bulldogs come from behind to top Capitals 3-2 in overtime 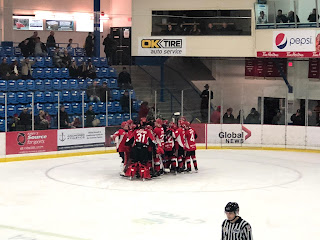 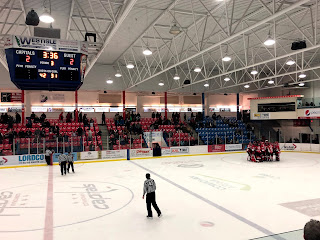 The Bulldogs were penalized within the opening two minutes of the game, but did a solid job of killing it off and not allowing anything on net. They would earn a power play of their own soon afterwards, and would threaten on it, but couldn't cash in. The Capitals would open the scoring just after the midway mark of the first, on a wrist shot from the left circle by Olivier Gauthier that was stopped by Jackson Glassford, but a cross-ice rebound off his left toe was one-timed into the open net before he could recover by Dimitri Mikrogiannakis at 11:14 of the first, with Cruze Cote and Tanner Sidaway drawing the assists. The Bulldogs came painfully close to tying it soon afterwards, on a shot that deflected off the crossbar and then hit the back of Ben Howard and layed on the goal line but stayed out. Jackson Glassford would come up with a big save later in the period on an in-alone net drive by Nolan Barrett with his glove to keep it 1-0 after one, with the Capitals out shooting the Bulldogs 9-7.


The Bulldogs looked flat early in the second, but fought back to tie the game just over six minutes into the period on a fantastic effort by Caige Sterzer, who won a race to washout an icing and then won a battle to fight behind the Capital net. Despite being prone on the ice, he managed to stick with it and sweep the puck to the front of the net where Olivier Fizet tapped it onto the tape of Josh Zary out front, where he made no mistake to one-time it far-side past the glove of Howard to make it 1-1 at 6:14 of the second. The Bulldogs pushed initially after the goal, but couldn't sustain any momentum as the Capitals promptly responded as they beat the Bulldogs back to their net following a defensive zone faceoff as Olivier Gauthier walked up the left wing and put a rink-wide pass to the right side of the slot where Cruz Cote put it off Glassford and in, stick side at 8:02 of the second to make it 2-1, with Tyrell Boucher also assisting.  The Capitals continued to press, with Glassford being penalized for defending himself after an abundance of traffic in his crease. He would make a couple great saves early on the power play, and a breakaway save on Olivier Gauthier, that also saw the Bulldogs again penalized with the Capitals earning a 29 second two-man advantage. Glassford was sensational during it, with half a dozen great saves, with the penalty killers coming up with a couple great blocks as the Bulldogs kept it a one-goal game. Once it was back to even strength, the Bulldogs had their moments and a couple good opportunities, but couldn't generate the equalizer before the period ended. Shots in the frame were 18-11 Capitals, for a total of 27-18 Capitals.


The Bulldogs came out on fire to start the third period, and potted the equalizer after a series of passionate plays to keep the puck in the zone. Ryan Doolin would initially knock it loose after a Mitchel Deelstra steal. Matthew Grouchy would find the loose puck, and proceeded to make two absolutely filthy one-on-one moves with the puck to make defenders look silly before putting a pass onto the tape of Ryan Doolin at the top of the crease where he one-timed it by Howard to make it 2-2 at 1:10 of the third. There would be no scoring throughout the remainder of regulation, with the Capitals having an extended push in the late minutes of the third, but the Bulldogs bent and didn't break, with Glassford making one more big save on a shot and a rebound with his left toe with four minutes left to preserve the tie. A minute later, Stephen Castagna had his feet taken out from under him at centre ice on a seemingly obvious and flagrant trip. The Officials would let it go, but at the end of the sequence penalized the Capitals for what looked like incidental contact on a battle at the front of the net. The Bulldogs again threatened on it, but couldn't find the go-ahead goal as the game went to overtime. Third period shots were 14-11 Capitals, for a 41-29 advantage in their favour after 60 minutes.


The Capitals had the initial possession in overtime, but Jackson Glassford got enough on a net drive by Dimitri Mikrogiannikis to keep it out. Dawson Tritt had the next chance, with Ben Howard getting a shoulder on a high-hard one to keep it out. The Bulldogs retained possession and regrouped to their zone, with Mitchel Deelstra dishing off for Tim Gould. He would gain the attacking zone before dishing off to Matthew Grouchy, who beat his man to the net and put hard far-pad low shot on net that was stopped by Howard, but he couldn't control the rebound that Tim Gould roofed after out-battling his defender for the game winner at 1:24 of overtime for the 3-2 final score.

Shots in overtime were 2-1 Bulldogs, for a game total of 42-31 Capitals with Jackson Glassford earning 2nd star honours with the win in net, while Ben Howard took the loss. Both teams went 0 for 3 on the power play.

The Bulldogs are next in action tomorrow night at home when they host the Chilliwack Chiefs for their Teddy Bear Toss.