Bulldogs win second straight, fourth straight on the road, 6-4 in Langley over Rivermen 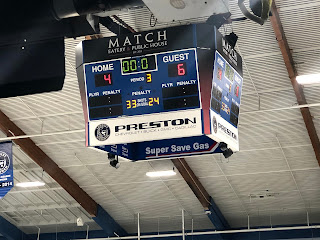 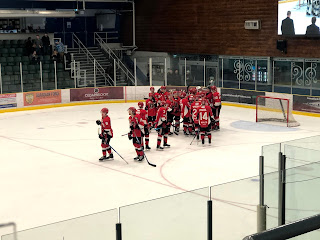 The Bulldogs began the game in the penalty box, due to a warm up infraction. They got into the late stages of the initial penalty, before again going to the box putting the Rivermen to a 26 second two-man advantage. The Bulldogs would kill that off, but couldn't get through the second minor, as the Rivermen went up 1-0 just 2:30 into the game on a pass off the left circle from Devin Leduc that was found by Ryan Helliwell, who walked in and picked the top corner, short-side high past the blocker of Jackson Glassford. The Bulldogs continued to chase the game in the ensuing minutes, but hung on long enough to tie the game on a pretty end-to-end play that saw Olivier Fizet defend  the front of his net and pick off a pass. He would put a perfect bank pass to a streaking Jackson Doucet up the right wing at centre ice, where he beat a defender over the Langley line to create a 2 on 0 rush that saw him put a perfect pass across the tape onto the tape of Josh Zary, who  cut across the crease to lift  a backhand home to make it 1-1 at 6:37 of the period. The Bulldogs earned a power play late in the period, and a follow up penalty to Langley put them on a two-man advantage. They were unable to connect on it before the buzzer. Shots in the first were 9-7 Langley.


The Bulldogs made good on the 5 on 3 advantage to open the second, making it a 2-1 game just 30 seconds into the period as Matthew Grouchy accepted  a Mitchel Deelstra pass in the right circle and threw it at the goal. It would be blocked, but  ended up on the tape of Stephen Castagna, who made no mistake to one-time it home. The Rivermen answered back to tie it just under three minutes later, on a cross-ice pass to the slot onto the tape of Kalen Szeto, who walked in and went high, glove side on Glassford to make it 2-2 at 3:16 of the second, with Kaeden Patrick drawing the lone assist. Just 20 seconds later, it was 3-2 Langley when Brendan Budy set up Jake Livingstone walking in through the left circle. He put a perfect pass across the crease to the back post where Matthew Hubbarde deflected it in at 3:36 of the second. The Bulldogs  quickly answered to tie the game, as Tim Gould kept the puck in by pinching down the right side. Olivier Fizet would find it, and put a perfect pass to the slot for Jackson Doucet. His first chance  hit the crossbar, but bounced across the goal line where Fizet made no mistake to tie it at 3-3 at 4:43 of the second. The following  minutes were played very aggressively, with physical play everywhere on the  ice. The Rivermen went up 4-3 on an unfortunate backhand pass across  the defensive zone onto a Langley stick as Kaeden Patrick walked in alone and went high glove on Glassford at 10:45 of the period. The Bulldogs drew a power play later in the period, on a trip behind the net which was somewhat a surprising call  after everything that was let go throughout the period. They would capitalize on it, with Josh Zary taking a  hit to get the  puck out to the left wing for Jackson Doucet. He took a give-and-go from Jackson Munro in the left circle, and walked in and snapped a long-side shot past the glove of Fleming to make it 4-4 at 15:26 of the period. Just three minutes later, it was 5-4 as Josh Zary won an attacking zone draw that was found by Olivier Fizet, who tapped it back for Jackson Doucet. He walked back to the top of the right circle and spun and fired a floater that snuck long-side past the blocker of Fleming at 18:10 of the second. The Rivermen pushed in the final seconds of the period for the equalizer, but Jackson Glassford made a couple big saves in tight, and got some help from Dawson Tritt who made a save on an open net rebound  with a  dozen  seconds to play in the  frame to protect the lead into  the third. A dust up at the buzzer  saw Langley earn the extra penalty, with the Bulldogs beginning the third on the power play. Shots in the period were 16-9 Langley,


The Bulldogs threatened in the early seconds of the third  on the power play, but couldn't convert on a series  of set ups to the door step. They would make good late in the opportunity to go up 6-4 as Tim Gould took a hit in his zone to work the puck loose up the left wing for Stephen Castagna. He made an outlet pass across the zone to the right side of centre ice for Ryan Doolin. Castagna would catch up and take a return pass over the Langley line up the left wing, before giving it back to Doolin in the slot, where he walked in and went backhand-forehand across the crease to tuck it inside the far post at 1:35 of the third. The Rivermen would press to get back into it on back-to-back power play chances later in the third, but Jackson Glassford was great to protect the lead, coming up with a series of big saves on the power play, and a late partial breakaway save on Brendan Budy to protect the lead for the 6-4 final.

Shots in the third were 9-8 Langley, for a 33-24 total in their favour, as Jackson Glassford earned the win in net while Braedon Fleming took the loss before being relieved after the fifth Bulldog goal. The Bulldogs went 3 for 6 on the power play while the Rivermen went 1 for 4.

With the win, the Bulldogs have won two straight, and four straight away from home. They conclude their pre-Christmas portion of their schedule tomorrow afternoon in Surrey, a 4:00pm start against the Eagles.