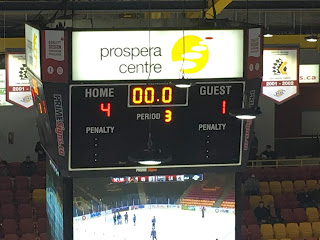 The Bulldogs got off to a fantastic start, running up a 9-1 lead in shots by the midway mark of the period. They had several near misses around the Salmon Arm net, as Keaton Mastrodonato hit the post from the paint, and a minute later a crazy scramble somehow still failed to find the net. A few minutes later Nicholas Seitz hit the post down the left wing, with a follow up scramble failing to find the net. The Silverbacks would then open the scoring, as Akito Hirose cut across the top of the right circle in the slot where he threw a quick shot inside the near post past Cole Demers to make it 1-0 at 12:53 of the first with assists going to Hudson Schandor and Andy Stevens. The Silverbacks had a couple solid opportunities over the following minutes, with Demers making two good saves on Stevens in tight with four minutes to play in the period. The Bulldogs pushed back, but again couldn't get a bounce as it stayed 1-0 after 20 minutes, with the shots favouring the Bulldogs 14-7.


The Bulldogs were penalized at the buzzer to end the first, resulting in a penalty kill to open the second that they succeed in not giving up much on. The Silverbacks continued to push the pace over the following 5-6 minutes, peppering Cole Demers who made a series of saves to keep it a one-goal game. The Bulldogs couldn't respond and push back before the Silverbacks went up 2-0, as Tyson Gayfer won a draw cleanly in the Bulldogs zone back to the right point for Andy Stevens, who scored with a perfectly placed wrist shot top corner, short-side high over the glove of Demers at 5:17 of the second. The Bulldogs bent but didn't break after that, earning a power play that they failed to score on but at the same time they generated a couple good chances. The Bulldogs were penalized shortly afterwards, but they didn't just kill the penalty - they scored their first shorthanded goal of the year to get back into the game. A shot that missed the net and came out to centre was misplayed by a Silverback defender, who was being pressured by Austin Spiridakis. He would have enough speed to race in alone where he made no mistake with a perfect backhand high over the glove of Chapman to make it 2-1 at 15:51 of the second, for his first career goal. The Bulldogs would earn a power play a minute later but couldn't generate much on it as it was a momentum killer. Shots in the period were 17-7 Silverbacks.


The third period began with the Bulldogs ending up in the penalty box just three minutes into it. The Bulldogs would successfully again kill it off, before earning a power play of their own two minutes later. The Bulldogs were unable to threaten for the most part, and a huge turning point just seconds later would put them into a two-goal hole as a pass from behind the goal line to the top of the paint was one-timed home through Demers by Jonathan Krahn, with assists going to Noah Wakeford and Andy Stevens at 9:32 of the third. Just 22 seconds later the scoring was completed as another turnover down low and poor coverage resulted in another wide open chance that was converted as Logan Shaw put a wrister past the glove of Demers to make it 4-1 with 9:54 gone in the third, with assists to Yewta Plamondon and Johnathan Krahn for the final score.


Third period shots were 7-6 Bulldogs, for a game total of 30-28 Silverbacks. Cole Demers took the loss in net, while Devin Chapman earned the win. The Bulldogs went 0 for 4 on the power play, while also scoring once while shorthanded. The Silverbacks went 0 for 3.


The Bulldogs are next in action Friday in Trail as they face the Smoke Eaters to kick off a three-in-three roadtrip through the Interior and Mainland.