A visit from Harry Z, Lough and Tironese to Green Bay, a round of Golf with my little guy! 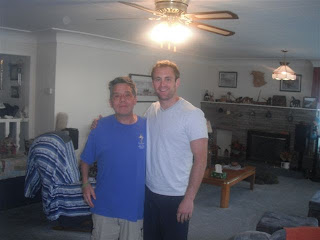 Nice picture above as well of Harry stopping to visit Bulldogs Assistant Equipment Manager Jamie Amos! I think it speaks volumes of what he thinks about the Alberni Valley and the people here that he makes it a priority to come back. I also think it says a lot of his character that he tracks down a schlub like me to say Hi and he also makes sure to find time to visit Jamie.  Put him on Crosbys line, he'll light it up!

Tough to hear the news confirmed yesterday that Ryan Lough and Evan Tironese will be heading to Green Bay in the USHL. When I heard they were selected in the USHL draft I hoped against hope that the success here last year and the familiarity here, coupled with the fact that they already had secured NCAA Scholarships in their rookie seasons with the Bulldogs might be enough to have them come back here for the upcoming season. Sadly it's not the case. Best of luck to both guys, and thanks for your two years in the Bulldogs sweater and best of luck in the future.

As I always say - granted, it's usually around the Trade Deadline - It's the nature of the game at all levels, but especially the Junior level. Players come, and players go. Here's hoping the returning Bulldogs are excited at the prospect of having an increased role with the team next year, and some prospective Bulldogs now see a greater opportunity to crack the roster. 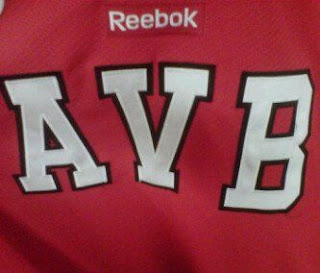 Port Alberni, BC – The Alberni Valley Bulldogs are excited about this season’s main camp which opens on Sunday, August 18th with fitness testing – players hit the ice on Monday, August 19th.

Tironese was first seen by Green Bay’s head coach Derek Lalonde at the 2012 World Junior A Challenge in Yarmouth, Nova Scotia – Lalonde was on Team USA’s coaching staff. Tironese was also listed with the Moose Jaw Warriors of the Western Hockey League. Ryan Lough, the Bulldogs captain this past season, is committed to attend St. Lawrence University commencing 2014/15.

The Alberni Valley Bulldogs release this statement from Ryan Lough:

“I was extremely honoured to be apart of the Bulldogs organization for the past 2 years and I truly believe Alberni is one of the best places in North America to play junior hockey. I loved every moment of being a Bulldog and it's something that will be apart of me for the rest of my life. I want to thank the coaches, my teammates, Tom McEvay, all of the billet families (especially my own the Mesic family) and all of the fans in Port Alberni. Without the unbelievable support of the community in Port Alberni junior hockey would not exist. Thank you so much to everyone, it was such a privilege to play in front of the best fans in Canada every night! Sometimes at this level there come difficult business decisions in the hockey world to hopefully help further our career and pursue the dream of playing professional hockey. This is the case in this decision as my heart will always be in Port Alberni. It was the toughest decision I have ever had to make to leave the Bulldogs. It meant the world to me to be apart of such a great organization like Alberni and it was all the people that surrounded the team that made my experience so special.”

With the departures of Lough and Tironese, the team has spent the summer filling the void in the roster. There are many exciting, skilled, and energetic prospects that will be attending main camp. This provides a big opportunity for Justin Georgeson who was acquired at the trade deadline from the Coquitlam Express. Georgeson is extremely excited to be coming to the organization and helping the Bulldogs build on a successful 2012/13 season.

The Bulldogs are also excited to have Shane O’Brien in the line up for the 2013/14 season. O’Brien was an off-season signing out of the Stratford Cullitons in the Greater Ontario Junior Hockey League where last season he was on a point-per-game pace. O’Brien is described as a high energy, quick player that plays a high-tempo game and sees the ice very well.

Adding to the compliment of Georgeson and O’Brien are returning 20-year-old Bulldogs Tryg Strand and Hunter Stewart. Strand is a hard working, honest, and physical player that can contribute offensively at the right times and adds invaluable leadership. Stewart is entering his third season as a Bulldog and is looking to start 2013/14 healthy after being sidelined at the start of last season with a broken jaw. Even appearing in only 36 regular season games in 2012/13, Stewart still contributed with 14 goals and 27 points.

Last season, there were also several rookies that competed each night who will be given every opportunity this season to showcase their skills. Dylan Haugen, Mitch Makin, and Zach Funk will be looked to this coming season to contribute offensively.

The team’s strengths going into main camp will be defence and goaltending. Returning d-men Jared Wilson and Kurt Gosselin were both in the top 10 in regular season league scoring for defencemen and will get significant power play time. Brad Rebagliati is returning between the pipes for the Bulldogs and will be given every opportunity to earn the #1 spot.

The organization would like to wish Ryan and Evan all the best in their future endeavours and have been working hard to shape another contending team for the 2013/14 season. The 2013/14 main camp will be deep in talent and will be exciting for the public to watch. The main camp schedule is highlighted by two red and white games: Wednesday, August 21st at 5pm with the Top 40 Prospects Game and Thursday, August 22nd at 7pm with the annual and white game featuring the Top 40 players at camp (returning players and prospects). 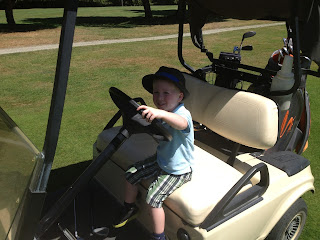 I had quite the amazing day with my son Griffin yesterday as we went out for his first ever round of golf at the Alberni Golf Club!

I can't thank the Staff and Members there enough for encouraging us to go, and everyone out there for being so good to Griff. I somewhat expected the members to scoff at a 3 year old kid on the Golf Course, but if anything they were so welcoming that I felt we could actually go play a round as opposed to just hitting the range and the putting green.

Bruce and Brian in the Pro Shop have always been awesome with Griff and me. No surprise that the Junior Program at the club continues to keep producing such great athletes...gotta start 'em young!

Thanks to everyone at the Alberni Golf Club! And for the record, he had just as much fun golfing as he did riding the cart!