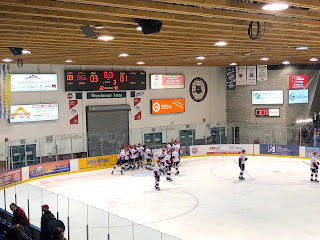 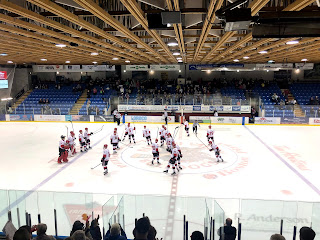 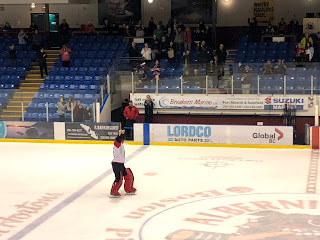 The pace was frantic in the opening five minutes,  with two whistles at the most as both teams got everyone into it early. The Capitals had an early 5-0 edge in shots, with Jackson Glassford being good early. The Bulldogs quickly took the lead a minute and change later when Jackson Glassford left a dump in back of his net for Tim Newson. He quickly reversed it for Moe Acee, who put a long pass up the right wing to centre ice for Caige Sterzer. He would carry it over the line, and cut  across the slot, all  the way  to  the left circle where he snapped a perfect shot, high far-side over the glove of  Zach Borgel to make it 1-0 at 5:31 of the first. The Bulldogs had a fantastic chance  on the next shift to add  to the lead, as Olivier Fizet drove down the right wing and then stuck a leg  out and drove hard and in on Borgeil, who made a   great save as the net was dislodged to keep it 1-0. It was Jackson Glassford's turn a minute later, as a perfect backdoor set up for Will Arquiett saw Glassford dive across to somehow get something on it to keep it out. The rest of the period saw the Bulldogs have the better of the chances, both on the rush, and on an extended attacking zone shift by Tyler Kostelecky, Dawson Tritt and Jackson Doucet, but Borgeil made a couple good saves on scrambles on the doorstep to keep it a 1-0 game after 20 minutes. Shots were 10-7 Capitals.

The second period saw much of the game fast-paced action with chances both ways. The Bulldogs capitalized on a long attacking zone shift with the Zary-Sterzer-Fizet line starting it, followed by fresh legs from the bench, resulting in Tommy Bannister finding Tim Gould, who put a shot on net after a spin move in the right circle that was deflected home in front by Austin Spiridakis in front of the crease at 3:57 of the second to make it 2-0 Bulldogs. That  lead would stand into the late stages of the period, with Jackson  Glassford again coming up with a couple big saves in tight to protect it. The Bulldogs finally earned their first power play of the game with under  four minutes to play in the period. Not only did they not look especially good on  it, they also took themselves off of it with a too-many-men penalty. The Capitals would make them pay for it, as Luc Wilson put a perfectly placed shot short-side high  past the blocker of Glassford  who couldn't see it due to a screen in front. Assists went to  Dimitri Mikrogiannakis and Primo Self at 18:36 of the second to make it 2-1 after 40 minutes. Shots in the period  were 19-7 Capitals, for a 29-14 edge into period three.


The  third period saw Jackson Glassford make a great two or three saves in the early moments of the period, both on the rush and on a rebound at the side of the net. Short of the midway point of the period, the trio of Zary-Sterzer-Fizet again went to work, and spent close to two minutes in the attacking zone to gain momentum. A couple minutes later, it was a 3-1 game when Jackson Glassford stopped a sharp angle bid to deflect the puck back of the net. Jackson Munro would come out with it, and skate it up the left wing before putting a pass onto  the tape of Mitchel Deelstra at centre ice. He walked over the blue line up the left side before cutting across the zone to the right point  where he simply wristed  one on goal that beat Zach Borgeil, who was screened by Ryan Doolin  at  the top of the paint to make it 3-1 at  11:03 of the third. There would be no further scoring, in large part due to  Jackson  Glassford, as the Capitals put anything  and everything on net, while the Bulldogs did a good job of not allowing secondary chances after the first save was made. The Bulldogs were penalized late with 1:05 to play, but did a good job of defending to not allow the Capitals to get back into it.


Third period shots were  19-8 Capitals, for a 48-22 total in the Capitals favour. Jackson Glassford earned 1st star honours with the win in net, while Zach Borgeil took the loss. The Bulldogs went 0 for 2 on the power play while the Capitals went 1 for 3.


The Bulldogs are next in action Friday night when they host the Victoria Grizzlies.