Exciting game, several great chances for Team Willison in the dying minutes to tie it up. A very Bulldog-esque comeback attempt, as they were down 4-1 after two periods.

I remember this time last year I got a little fired up due to a lack of compete in an Exhibition game and posted something about it here on the blog, along the lines of how that kind of effort won't go over well with these fans in this town...nice to see a never-say-die effort in what was just an Intersquad game....you never know when you might need it, such as down a goal late on home ice in a lose or go home game for the Island Championship!

Team Hayduk, Cameron Bertsch at 8:14.
Looked like Jeff Rose might have scored it. Will Finlay also assisted.

Gorgeous goal by Alexander Methorst puts Team Hayduk up 3-1 with 6:29 gone in the period. Unassisted.

Team Hayduk goes up 4-1 on a pretty passing play at 11:10, Brendyn Smith from Taylor Derynck and Mitch Makin.

Team Willison makes it 4-2 on the powerplay, Josh Adkins from Jared Wilson and Skyler Logan 5:49.

Team Willison makes it 4-3 at 11:01 on a wrap-around banker by Logan Savard. Unassisted. 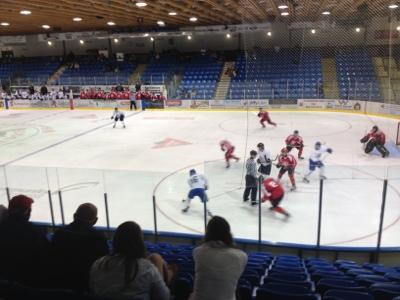 Hoping that Josh will impress enough in the near future to make you spell his last name correctly :-)
Looking forward to your broadcasts this season, heard your the best!

Thanks for the compliment and thanks for the correction...sorry for the typo. I hoped I was going to be able to pass the buck and it would be wrong on the sheet but it was correct. As I had a 3 year old on one side of me and a 2 month old on the other I still think it was no small miracle i was updating at all haha!