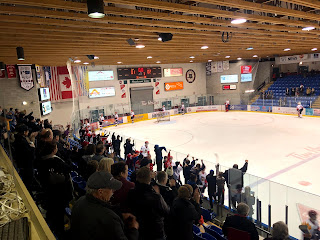 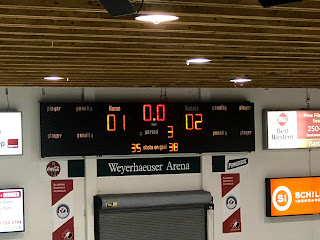 The game started with the Bulldogs having an obvious level of desperation, that saw them have the better of the chances and the play early in the contest.  They came close to opening the scoring when Josh Zary found his own rebound off a deflection on an early power play chance, and slid it through the legs of Jordan Naylor on his backahnd. It didn't make it over the line though, with a defender saving it on the goal line. The Clippers had a similar chance at the other end, with a cross-crease pass going off a skate before it was saved by Luke Pearson. Another great Bulldog chance later in the period saw Mitchel Deelstra pick up a bank pass up the right wing to skate in alone, but he couldn't elevate it over Naylor who kept it out. At the other end, Luke Pearson came up with a big save on a shorthanded rush later in the period by Tim Washe to keep it scoreless. Shots in the first were 11-10 Clippers.


The second period brought about the same from the Bulldogs, with the pace high both ways, and the game continuing to remain tight. The Bulldogs finally opened the scoring - the first time in the series that they achieved the feat as Tim Gould started it all off with a fantastic defensive play on a Nanaimo 2 on 1 rush. He would then lead a rush the other way with blazing speed right on net where a stick knocked his shot wide. The Bulldogs found the loose puck, and Mitchel Deelstra set up Tommy Bannister who put a pass from the right circle back to the top of the slot for Mattias Dal Monte, who snuck a low slapper through Naylor to make it 1-0 at 6:01 of the second. The Bulldogs carried the play for the following few minutes, but couldn't bury or get a  bounce on several chances to build their lead, or take advantage of a power  play opportunity. The Clippers would push back to tie it late in the frame after a series of bounces and battles won to keep it in, as Luke Pearson made two great saves on both Kyler Kovich and an Ethan Scardina rebound attempt, before Scardina found it again and lifted it home to make it 1-1 at 19:27 of the second. Shots in the period were 16-11 Bulldogs, for a 26-22 total in their favour heading into period three.


The Bulldogs appeared tight to start the third, and/or the Clippers were motivated - and they carried the better of the play early with a series of big saves by Pearson to keep it tied. The Clippers kept pushing though, and took a 2-1 lead four minutes into the period on a pass out of the left corner to the net where Pearson made the first save, but Tim Washe one-timed the rebound home glove side from the top of the crease. Assisting on the play were Ethan Scardina and Kyler Kovich. 2-1 would prove to be the final, with the Bulldogs killing off two penalties throughout the third, one with just over five minutes to play to keep it a one-goal game, with Luke Pearson coming up with several big saves to give his team a chance. They would generate a couple of good looks, but there wasn't much in the way of Grade A chances or sustained attack zone time as the Clippers salted the time away and didn't give up much to defend their lead to the buzzer.


Third period shots were 16-9 Clippers, for a game total of 38-35 in their favour. Luke Pearson earned 2nd star honours with the loss, while Jordan Naylor earned the win. The Bulldogs went 0 for 3 on the power play while the Clippers went 0 for 2.