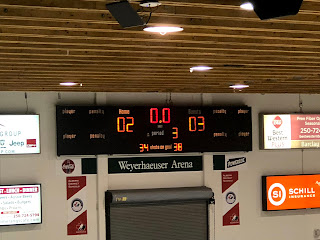 From the opening puck drop, the game was somewhat sloppy - at least from the Bulldog perspective, as they were  unable to get anything going early.  The Rivermen opening the  scoring on a shot and a rebound from a sharp angle that went off the stick of Luke Pearson to the slot where Jonathan Stein one-timed it home far-side to make it 1-0 at 2:35 of the first, with Tanner Versluis drawing the lone assist. The Rivermen kept pressing, and the Bulldogs  continued to fail to find their game, and it was a 2-0  game on a turnover and a net drive that saw a centering pass by Joseph Musa go off the skate of Jonathan Stein in the crease at 11:29 with  Brendan Budy also drawing an assist. The Bulldogs pressed late  in the period, after tempers flared on both sides with physical play increasing both ways. The Bulldogs threatened to get on the board on the power play late in the period, with Jonathan Mor making a couple big saves in tight to protect the lead. The Rivermen were again penalized in the dying seconds of the period as the Bulldogs began the second on the man advantage.  Shots in the first were 14-10 Langley.

The Bulldogs were unable to generate chances or momentum on the power play, but  drew yet another power play short of five minutes in. Again, it failed to threaten as they fought the puck and didn't look in sync and were unable to test Jonathan Mor to trim the deficit. Yet another opportunity late in the period brought about the same result, as the Rivermen didn't give up much to protect their lead. Langley would earn a power play of their own in the final seconds of the period, to begin the third on the man advantage. Shots in the second were 12-8 Bulldogs, for a 22-22 total after 40 minutes.

The Rivermen made good on the power play, after extended pressure in the zone as Jake Livingstone found a bounce of  the left wing wall and walked into the circle where he ripped a perfectly placed shot top corner, far-side over the glove of Pearson to make it 3-0 and 1:22 of the third, with assists to Joseph Musa and Tanner Versluis. The Bulldogs earned a power play a few minutes later, and finally made one count to get into the game, as passionate battles  on the left half-wall by Ryan Doolin, Josh Zary and Matthew Grouchy saw the Bulldogs keep the puck in, before Grouchy slid it back to the deep slot for Mitchel Deelstra, who put a quick release off the glove of Mor and in, top corner to make it 3-1 at 6:49 of the third. The building was alive in the following minutes, and the Bulldogs created a handful of opportunities and kept the pressure on and made it a one-goal game with six minutes to play as a one-timer from Tim Gould went off a stick and off the end glass before bouncing back  to the side of the net where Ryan Doolin poked it home five-hole  to make it 3-2, t 12:31 of  the third. The Rivermen did a good job over the following minutes to not give up much, but the Bulldogs mounted a push late aided by another power play with under four minutes to play. It wouldn't generate more than a single shot, with the Rivermen killing it off to protect their lead, and also generating a good shorthanded chance that saw Pearson come up with a right toe save to keep it a one-goal game. The Bulldogs would buzz the Langley net in the dying seconds but Jonathan Mor came up with a big shoulder save on a pass from behind the net with under five seconds to play to make  it a 3-2 final.

Third period shots were 16-12 Langley, for a game total of 38-34 Rivermen with Luke Pearson  taking the loss while Jonathan Mor earned 2nd star honours with the win. The Bulldogs went 1 for 7 on the power play while Langley went 1 for 2.

The Bulldogs are next in action Thursday night when they host the West Kelowna  Warriors.