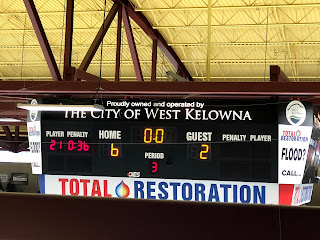 The game began with a resounding thud, as the Bulldogs  trailed 1-0 just 21 seconds in as Holden Kodak walked down the right wing and threw a puck on goal  far-pad low where Luke Pearson made the save, but had the rebound go off his right toe and onto the tape  of Colby Elmer who tapped it in from the crease. Also drawing an assist on the play was Nick Ardanaz. Pearson would be busy over the following minutes, as the Bulldogs continued be loose in their end. He kept it a one-goal game  until they responded to tie it, as Matthew Grouchy won back-to-back draws in the Warriors end, the second seeing Ryan Doolin get two shots on net. Johnny Derrick would stop them both, but Tommy Bannister found the second rebound and potted it inside the far post to make it 1-1 at 7:52 of the first. The Warriors would take the  lead back on a turnover at centre  ice five minutes  later that saw Colby Elmer walk down the right  side  one-on-one where he put a perfectly  placed backhand top corner, short-side over the glove of Pearson to make it 2-1, unassisted at 12:19 of the first. The Bulldogs would push a few minutes later on a good shift in the attacking zone, but get caught on the wrong side of the puck giving up a 2 on 1 that turned into a breakaway that saw Drew Vieten skate in alone and go off the post and in blocker side to make it 3-1 Warriors at 16:07 of the first, with Deegan Mofford assisting. The Bulldogs would pepper the Warrior net in the final two minutes of the period with an inspired effort, but couldn't get back into it as it stayed a two-goal game after 20 minutes. Shots were `17-15 Bulldogs after one.


The score stayed that way into the middle of the period, with the Bulldogs not looking especially sharp in an attempt to mount a comeback. The Warriors came out of the mid-period media time out, and had a handful of great chances around the Bulldog net, but Luke Pearson came up huge to keep it a 3-1 game. The Bulldogs would earn  a power play of their own later in the period, and connected on it to get back into the game as Tim Gould kept the puck in at the top of the point  and dished off to Matthew Grouchy   in the left circle. He made a pretty pass to a wide open Josh Zary on the doorstep, who initially lost the handle but recovered to stuff a backhand deke home to make it 3-2 at 14:43 of the second. The Bulldogs earned another power play immediately following it, and threatened all around the net, but couldn't  convert. Yet another power play in the  final minute of the period saw them create several great chances, but be unable to find the  equalizer, beginning the third with 52 seconds on the power play. Shots in the second were 25-14 Bulldogs,  for a 42-29 advantage after 40 minutes.

The  Bulldogs were sloppy to begin the third on their power play, with the Warriors having  a great chance to build their lead, only to have Luke Pearson make a highlight reel save with  his heel in midair on a cross-ice set up to keep it 3-2. The Bulldogs earned another power play, and were flat on it. It came back to haunt them almost immediately, as they blew coverage in their zone allowing a loose puck to the  slot and a breakaway for Carter Wilkie, who walked on goal and tucked a forehand deke inside the far post to make it 4-2 at 8:18 of the third, with assists  going to Johnny Evans and Holden Kodak. Five minutes later, the  Bulldogs ended up  in big penalty trouble, first with a soft call on a bump by Dawson Tritt that appeared to be sold by Johnny Evans, which was followed by a match penalty for kicking to Moe Acee. The Bulldogs killed off the two minutes of 5 on 3 play for the Warriors, and a further two minutes of the major, but they couldn't get out of it before the Warriors went up 5-2 as Nicholas Ardanaz put a shot on net from the left circle that was deflected by Porter Dawson and stopped by Pearson, but the rebound went across the crease where it was tappedhome by Deegan Mofford to make it 5-2 at 13:35 on the power  play. The final salt  in the wound came a minute later, when the Bulldogs earned a power play chance, but gave up a shorthanded goal to add further insult to injury as a defender fell down, and no one picked up Carter Wilkie, who walked into the slot and beat Pearson with a long-side wrist shot past his blocker to make it a 6-2 final at 14:50 of the third, with Drew Veiten drawing the lone assist at 14:50 for the 6-2 final.

Third period shots were 14-6 Warriors, for a game total of 48-43 in the Bulldogs favour, with Luke Pearson taking the loss while Johnny Derrick earned 1st star honours with the win. The Bulldogs went 1 for 7 on the power play, and the Warriors went 1 for 5 while also scoring once while shorthanded.

The Bulldogs are next in action Friday when they host the Grizzlies.