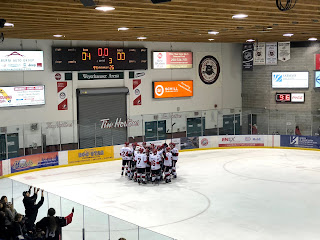 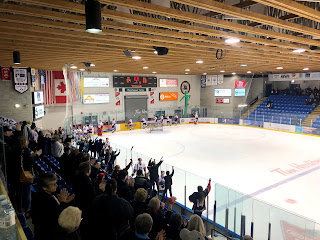 The game was fun to watch early, with good pace and few whistles. The Bulldogs had an early edge in the play, running up a  lead in shots and testing Thomas Wardle in the Kings net. It would lead to a 1-0 lead, as a series of board battles were won in the Kings  zone in succession. Cam Newson would keep the puck in at the right point and put it in deep below the Kings goal line  where Ryan Doolin and Dawson Tritt fought it loose. Tritt  would walk out into the bottom of the right  circle and put a quick spinning shot low and on  net  from a sharp angle where it surprised Wardle and snuck through over the  line at 8:24 of the first. The Bulldogs were penalized not long afterwards, and the Kings got a  couple of pucks on net but Luke Pearson looked sharp in not allowing any second opportunities.  The Bulldogs earned a power play following it, but were penalized just 30 seconds into it. Shots in the first were 11-6 Bulldogs.

The second period saw much of the same, as the Bulldogs continued to play at a high pace. They would double their lead just three minutes into the period in pretty fashion as Austin Spiridakis blocked a shot in the Bulldog end, and  immediately flew out of the zone up the left wing and into the Kings zone. He would dish off to Jacob Bosse in the left circle, and drive the net were Bosse put  it perfectly to the top of the crease where Spiridakis deflected it home five-hole to make it 2-0 at 3:09 of the period. Despite continuing to press, they couldn't pad their lead, or draw a call as Austin Spiridakis was tackled while walking in alone on net. Seconds later at the other end, the Bulldogs were penalized. That would be further magnified by a slashing call just 19 seconds later, putting the Kings to a 5 on 3 power play of 1:41 in duration. The Bulldogs would kill it off, with Pearson making a couple good saves, the most notable with his right toe on an end-board bounce of Ethan Schmunk. The Bulldogs would earn a power play just 30 seconds after the kill, and took just 11 seconds to make it count as Dawson Tritt won a draw back to the left point for Jackson  Munro. He would make a quick D-to-D pass to the right point for  Jimmy Rayhill, who put a quick release that was deflected off the post by Dawson Tritt. It would bounce back to the slot where Mitchel Deelstra kicked it across the slot for Ryan Doolin, who somehow found a way to slide it past Wardle from the seat of his pants on his backhand to make it 3-0 at 10:44 of the period. The Kings mounted a push in the following minutes, but the Bulldogs defended and pushed back to end the period  with a couple good opportunities. Shots in the frame were 18-12 Bulldogs, for a 29-18 edge in their favour  after 40 minutes.

The Bulldogs efficiently killed off a Kings  power play  to start the third, and despite spending the following minutes in the attacking zone couldn't again draw a penalty, or pad their lead. The Kings would earn another power play five minutes into the period, with  some fireworks early in it  as  Austin Spiridakis took a blow to the head but couldn't draw a penalty, bringing about a response from Tim Gould who dropped the gloves with Davis Pennington. The Bulldogs would once again kill off the penalty and support Pearson well, in not giving up much. They would continue through the period to control the play and spend extended sequences in  the Kings zone,  but completed  the scoring  by going end to end  from their own zone  from a faceoff, as a 3 on 2 rush took just a handful of seconds as Jacob Bosse went forward off the draw for Austin Spiridakis, who again immediately took off on the attack.  He would set up Tommy Bannister walking to the net on the right side of the slot where he  walked in and went high, short-side off the glove of Wardle and  in at 13:16 for the 4-0 final.

Third period shots were 15-8  Bulldogs,  for a game total of 44-26 with Luke Pearson earning 1st star honours with the win and his second shut out, while Tomas Wardle took the loss.

The Bulldogs  are next in action  Friday night when  they host the  Coquitlam Express.