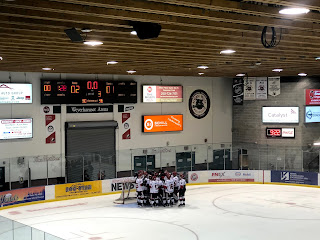 A fast start with few whistles saw great flow to the game early was fun to watch, but into the back half of the opening ten minutes the play turned somewhat sloppy with the Bulldogs being guilty of turning the puck over in both the offensive and defensive zone on a handful of instances, but escaping any damage on the scoreboard. The Bulldogs would go to the power play just after the midway point of the period, but were unable to generate chances or momentum. Another power play opportunity immediately followed it, that again failed to generate much until the dying seconds when Jordan Naylor made a good save on a Jackson Doucet deflection attempt. Just a second after the opportunity elapsed Mitchel Deelstra simply just put the puck on net from a sharp angle just off the goal line from the right side of the net where he snapped it through the legs of Naylor to make it 1-0 at 15:46 of the first, with assists going to Dawson Tritt and Ryan Doolin. The Clippers earned a power play on the next shift, and while they threatened on it it stayed 1-0 after 20 minutes with Jackson Glassford making a couple solid saves in tight to protect the lead. Shots were 14-10 Bulldogs after one.


The second period saw an increase in both physical play and overall intensity in the early minutes, with both goalies tested in tight. The physical play continued into the middle of the period, with the score staying the same with the Bulldogs coming up with a solid penalty kill. They went to a power play of their own in the back half of the period, and they made good on it as they won an extended battle on the far half-wall in their zone before Jimmy Rayhill put a perfect indirect pass up the left wing for a streaking Mitchel Deelstra who raced in alone and cut across the crease where he tucked a backhand through the five-hole of Naylor to make it 2-0, on the power play at 12:19 of the second. There would be no further scoring through the period, with a great backcheck by Grayson Valente perhaps saving a goal on an odd-man rush that followed a Bulldog odd man chance the other way that somehow stayed out. Shots in the period were 10-4 Clippers, for a 20-18 Nanaimo edge after 40 minutes.


The third period didn't see much in the way of chances through the opening minutes, but as the period wore on the Clippers increased their level of desperation and controlled extended stretches in the Bulldog zone and put a bushel of pucks on net that were kept out by Glassford, perhaps the most notable being an in-alone chance by Ethan Scardina that he fought off with his blocker. The Clippers kept the push on, with the Bulldogs having several opportunities to counter on the rush, but being unable to finish them for further insurance. The Clippers would go to the power play with under five minutes to play, and they made good on it as Robby Drazner zipped a mid-air wrist shot at the net where it was deflected down to the ice and through the five-hole of Glassford by Travis Walton to make it 2-1 at 15:47 of the third. That's as close as the Clippers would come, as the Bulldogs made the lead stand into the final minute, when they were whistled with just over half a minute to play for too-many-men on the ice. A long delay perhaps was to their benefit, as they didn't give up much and in fact came close to hitting the empty net off the ensuing draw as Stephen Castagna hit the post from the Bulldog end. Another good defensive clear by Isaac Pascoal missed the net but did the job in that it killed the remaining time off the clock.


Third period shots were 16-12 Clippers, for a 36-30 total in their favour. Jackson Glassford earned 1st star honours with the win, while Jordan Naylor was tagged with the loss. The Bulldogs went 1 for 3 on the power play while the Clippers went 1 for 5.


The Bulldogs are next in action Friday night in Prince George when they face the Spruce Kings when they kick off a three game road trip through the Mainland Division.