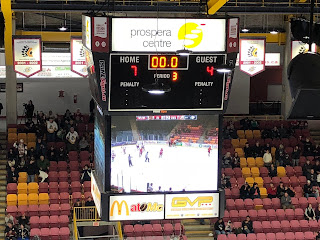 The Bulldogs got off to a fantastic start in the first three minutes of the game with four shots on goal and a series of scrambles around the Chief net that Nolan Hildebrand kept out. The Chiefs pushed back and tested Cole Demers a couple of times in the following minutes, and he was equal to the task, making a big glove save on Cole Donhauser. The Bulldogs kept the pressure up, and earned a power play opportunity short of the midway point of the period. They came close initially on it, with Evan Googins hitting the crossbar, but the Chiefs killed it off. The Bulldogs found the net soon afterwards, with Dawson Tritt doing a good job to retrieve a loose puck deep in the Chiefs zone for Ethan Jones. He put a perfect pass to the slot for Mitchel Deelstra, who perfectly finished it top corner, short-side high over the glove of Hildebrand to make it 1-0 at 9:18 of the first. The Bulldogs kept up the pressure, and earned another power play, but couldn't make it count. Later in the period, Ryan Miotto was whistled for Interference seconds after taking a big check without the puck at the Chilliwack line. The Chiefs made the Dogs pay for it, tying the game on a point shot by Marcus Tesink that was deflected past the toe of Demers from the top of the crease by Skyler Brind'Amour. Matt Holmes also drew an assist at 14:29 of the first. The Bulldogs responded immediately and buzzed the Chiefs net, drawing another power play with less than a minute to play in the frame. Shots in the first were 13-12 Chiefs.

The Bulldogs were unable to cash in on the power play to begin the second, but pushed hard through the opening five minutes and attacked on a long shift hemming the Chiefs in their zone. They would make an ill-advised pass up the middle though, that led to a penalty against on a partial breakaway. The Bulldogs would successfully kill it off, but couldn't build on the momentum as seconds later it was 2-1 as a Bulldog forward got tied up with Cole Demers in the crease, pushing him out of position allowing Cole Donhauser an open net to make it 2-1 from the slot. Brett Willits drew the lone assist at 7:38 of the period. The Bulldogs answered back almost immediately, as just over a minute later it was 2-2 as Aaron Bohlinger accelerated out of his zone and head-manned it for Ryan Miotto over the Chiefs line up the left side. He would drop it for Jackson Doucet, who put a perfectly-placed pass onto the tape of a driving Keaton Mastrodonato at the side of the net, where he deflected it home top corner, short-side to make it 2-2 at 8:44 of the second. The Chiefs would take the lead back with just over five minutes to play in the period on the power play, as a point shot by Alexander Marrocco beat a screened Cole Demers high, glove-side. Assists on the play went to Matt Holmes and Kevin Wall at 14:30 of the second. Again, the Bulldogs instantly responded, as just 30 seconds later it was 3-3 as Jackson Doucet dropped it back for Grayson Valente at the Chief line, where he walked in and put a shot on goal that was stopped by Hildebrand, but Ryan Miotto dove to beat his defender to swipe it home five-hole at 15:00 even. The Dogs took the lead back late in the period, with Ryan Miotto gaining the attacking line and flipping the puck to the bottom of the left circle for Jackson Doucet. He would glove it down, and put it to the top of the crease for Keaton Mastrodonato, who one-timed it home five hole to make it 4-3 Bulldogs at 16:57 of the second. They couldn't hold the lead though, as Skyler Brind'Amour took a head-man pass up the left wing and got by a Bulldog winger playing defence to skate in alone on Cole Demers. He would make the first save, but couldn't get any help on the rebound as it was lifted home from the paint by Kevin Wall, with Matt Holmes also drawing an assist at 18:36 of the period for a 4-4 tie after 40 minutes. Shots in the second were 14-8 Chiefs, for a second period total of 27-20 in their favour.

Just seconds into the third the Chiefs took the lead back, on a pass from behind the goal line to the top of the crease one-timed home past Demers by Kevin Wall for his second of the game. Assists went to Skyler Brind'Amour and Matt Holmes at 38 seconds of the period. The Bulldogs weren't able to push back before an ill-advised pass up the middle of their own zone saw them be unable to get possession back before it was a 6-4 game as Skyler Brind'Amour took a pass at the bottom of the left circle before walking in on goal and beating Demers high, short-side on his backhand. Assists on the play went to Kevin Wall and Matt Holmes at 4:53 of the third. The Bulldogs would continue to try and fight back, but couldn't generate enough sustained pressure to do so. They came up with a penalty kill later in the period to hang around, but the Chiefs further padded their lead on a net drive by Ethan Bowen that was slid across the crease and finished by Carter Wilke, with an additional assist for Harrison Blaisdell at 15:20 of the third to make it 7-4. The Bulldogs were a crossbar away from making a game of it on the following shift, as Keaton Mastrodonato kept the puck on a 2 on 1 rush and beat Hildebrand but couldn't beat the crossbar as it stayed out.

Third period shots were 17-7 Chiefs, for a game total of 44-27 in their favour, with Cole Demers taking the loss, giving up 6 goals on 35 shots before being relieved by John Hawthorne. Nolan Hildebrand picked up the win. The Bulldogs went 0 for 4 on the power play while the Chiefs went 2 for 4.

The Bulldogs are next in action Friday in Nanaimo.