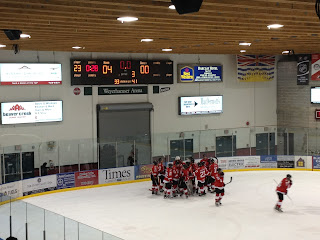 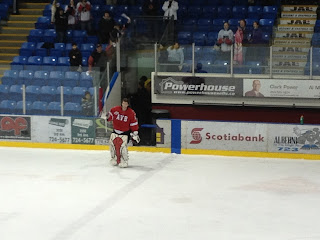 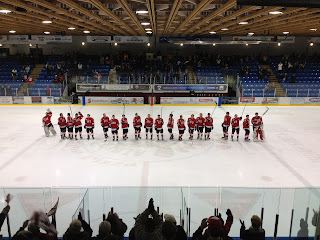 A very fun night at the Dog Pound with good atmosphere in the building, good special teams and goaltending from Matt Larose and a big 4-0 win over a bitter rival. Still hard to believe that the Clippers haven't visited the Dog Pound since November isn't it?

The game had great flow and pace early with each team having their opportunities. The Bulldogs would draw first blood in the back half of the opener for a 1-0 lead after one when Ryan Lough finished off a three-way passing play on the rush when he put a shot on net from the slot that appeared to hit a Nanaimo stick before going up and over Christopher Eiserman for a 1-0 Dogs lead after one.

The second saw a 5-minute penalty to Brenden Forbes put the Dogs on a long power play, but it was instead the Clippers that carried the play with aggressive and urgent penalty killing to draw a penalty and make it 4 on 4. After the four-aside was done the Dogs went back to the power play and they connected to make it 2-0 when Tyler Berkholtz put a one-timer from the slot on net that appeared to hit Eiserman and then the post. Referee Adam Griffiths was directly behind the net to signal goal as the Dogs crashed the crease and found a way to get the puck over the line as Josh Mitchell was credited for the marker. The Clippers would have their fair share of chances to get in the game late in the period when they carried the play, forcing the Dogs into repeated penalties and back-to-back 5 on 3 power plays for the Clippers. The Dogs penalty killers held with Matt Larose coming up big and Josh Mitchell winning several big draws on the start of the two-man advantages to kill precious time to keep it 2-0 Dogs after two.

Again the Dogs ended up in the penalty box with the Clippers pushing the pace to start the third on the power play but they were unable to find the net. The Bulldogs would go up 3-0 just seconds after a Trent Dorais scrap with Graeme McCormack as Alex Grupe tipped the puck in deep where it was found back of the net by Tyler Berkholtz, who in turn set up Josh Mitchell on the doorstep where he one-timed one home with just over ten minutes to play in regulation. The game would get ugly shortly afterwards when Kyle Kramer got the jump on Turner Popoff in a scrap, with the end result being Popoff's head being driven into the ice resulting in a huge pool of blood on the ice and a four minute Bulldog power play. Yet another Dogs penalty would take them off the advantage, but on the second minor they found the net to make it 4-0 when Alex Grupe tipped in a Daniel Delbianco point shot with 6:45 to go. The Clippers pushed hard to snap the shutout with a power play in the final two minutes, but again Matt Larose and the penalty killers stood tall as time expired.

Final shots favoured the Clippers 41-33 with Matt Larose and Christopher Eiserman being the goalies of record with the Dogs going 2 for 5 on the power play and the Clippers going 0 for 6.


Next up, PACK THE PLEX Friday when the Capitals are in town...Great game Dogs!