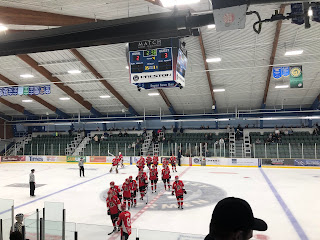 The Bulldogs got the first good opportunity on net in the opening seconds of the game, with Braedon Fleming coming up with a pad save on a Jackson Doucet. The next shift, it was 1-0 Rivermen as Kalen Szeto jumped on a pass across the Bulldog blue line and intercepted it to race in alone where he snapped a shot high past the blocker of Hawthorne to make it 1-0, un-assisted at 1:43 of the first. The Bulldogs chased the game over the following minutes, and weren't able to get much going, with Hawthorne coming up a couple big saves to keep it 1-0, most notably while on the seat of his pants at the top of the crease off of CJ Walker from the top of the paint. Langley would take a 2-0 lead at the midway point of the period when the Bulldogs failed to defend their net on a counter attack as Hawthorne made a good save on an initial 1-on-1 that turned into an in-alone chance for William Stromp that saw Hawthorne came up with a save but not get any help on the rebound as Trevor Ayre found it between two Bulldogs in the crease to make it 2-0 at 9:43 of the first. The Bulldogs did a good job of responding throughout the remainder of the period, but were unable to get a Grade A chance to beat Fleming as it stayed 2-0 after 20 minutes, with Langley up 14-13 in shots.

The Bulldogs came out flying to start the second, making it a 2-1 game just 24 seconds into it as Jackson Doucet played the puck back of the Langley net for Ryan Miotto. He would chop it loose for Keaton Mastrodonato, who walked all the way up the left wing, across the top of the blue line, and into the right circle where he beat fleming with a top corner shot, long-side over his blocker to make it 2-1 at 24 seconds into the period. The same line stayed out, and again attacked on the next shift and came close to to tying the score. The solid start certainly appeared to set the tone for the remainder of the period, as the Bulldogs kept their pace up throughout it and carried the better of the play. They would get the equalizer with just over five minutes to play in it, with John Hawthorne coming up with a big save seconds prior on a breakaway chance for C.J Wilson. The Bulldogs would counter on the rush, as Darren Rizzolo sent Evan Googins up the left wing over the Langley line. He would delay and then hit Ethan Jones with a perfect pass in the slot. He then made an equally perfect feed onto the tape of Tanner Pochipinski at the side of the crease, where he deflected it past Fleming for his first career goal at 14:31 of the second to make it 2-2. The Bulldogs would come painfully close to getting the go ahead marker before time expired in the period, as Darren Rizzolo hit the crossbar from the line, and Ryan Miotto also hit the iron on the power play. Braedon Fleming would come up with a big save on Jackson Doucet on a power play late in the period, as Evan Googins put a perfect rink-wide pass onto his tape that Doucet appeared to put upstairs, short-side only to have Fleming go post-to-post to just get an arm on it to keep it 2-2 after 40 minutes. Shots in the period were 10-6 Bulldogs, for a 23-20 lead after two.


The third period was played at a high pace throughout the first half of it, with both sides having good chances but the goalies standing tall. The Bulldogs came close to getting the go-ahead marker on a power play of their own, before Langley peppered Hawthorne on a man advantage of their own, and he was fantastic coming up with at least half a dozen saves to keep it tied. Hawthorne would again come up huge with less than five minutes to play, as he stopped Ethan Leyh on an in-alone breakaway to keep it tied. As the time ticked down late in the third, the Dogs appeared to be running out of steam, but they did a good job of bending and not breaking in forcing overtime. Shots in the third were 15-6 Langley, for a 35-29 advantage for the Rivermen after 60 minutes.


Langley had the first possession of overtime, but the Bulldogs defended well to get possession back to get on the attack. Braedon Fleming would come up with a breakaway save on Jackson Doucet. The Bulldogs again defended and got the puck back when Aaron Bohlinger battled through a one-on-one to dig it up the left wing for Evan Googins. He would head-man it onto the tape of Doucet at center ice, who made no mistake on his second breakaway, out-waiting Fleming and snapping it home five hole for the game winner.

Shots in overtime were 2-0 Bulldogs, for a 35-31 Langley advantage. John Hawthorne earned 1st star honours with the win, while Braedon Fleming took the loss. The Bulldogs went 0 for 4 on the power play while the Rivermen went 0 for 3.

With the win, the Bulldogs snap a three-game losing streak. They're next in action Friday when they host the Nanaimo Clippers.