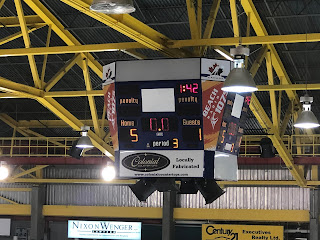 The pace was high early in the contest, with the Bulldogs having the best early chance when Mitchel Deelstra made a nice move entering the zone to walk to the slot, with Max Palaga making a solid blocker save. The Bulldogs would be penalized a minute and change later, but managed to kill it off with Cole Demers good when he needed to be, and his penalty killers doing a good job to limit chance against. Demers would come up big short of the midway point of the period, when the Bulldogs were in full control of the puck in their zone but coughed it up for a breakaway that saw Demers come up with a big save on Ben Helgeson. The Bulldogs would again be the team picked out of a battle in the corner to be the guilty party a few minutes later, but again killed it off with Demers making a couple good saves. Once it was 5-on-5, the Bulldogs got their game going a bit, with Palaga again making a good save in the deep slot in Deelstra to keep it scoreless. The Bulldogs would be penalized a third straight time late in the period, on what looked like a good defensive play. The call would be a big one, as the Vipers finally took advantage to open the scoring as Jack Judson took a pass at the top of the point from Jagger Williamson and one-timed it on goal where it was perfectly deflected into the top corner over the glove of Demers. The Vipers would push for more in the final minute of the period on an odd-man rush, but Demers came up with a fantastic desperation save going post-to-post to get his arm on it to keep it out. Shots in the period were 13-5 Vipers.
The second period saw the penalty parade continue, with two calls that certainly weren't questionable. The Vipers went to work on a 42 second 5 on 3 power play, but the Bulldogs killed it and the following minor with Demers coming up with again a series of big saves in tight to keep it 1-0. It would be the Bulldogs turn to finally earn a power play short of the midway point of the period, with the advantage turning into a 5 on 3 power play when Jesse Lansdell caught Marcus Walter with a knee-on-knee hit in neutral ice that appeared to obviously injure Walter, as he didn't return for the remainder of the period. It would just be a minor penalty, but the Bulldogs made it count as Darren Rizzolo found Ryan Miotto at the goal line at the right side of the net where he put a cross-crease pass onto the tape of Jackson Doucet, who made no mistake in hitting the open side to make it 1-1 at 8:22 of the second. Penalties would continue to play a factor, as just a minute later Mitchel Deelstra would appear to take a stick to the face, and in the process of falling pull the Viper's helmet off. He would get the only penalty, and the Vipers went up 2-1 when the first save was made on a point drive by Demers, but Jesse Lansdell found the rebound in the crease and put it home. Mitch Andres and Jagger Williamson drew the assists at 9:44 of the third. Just 17 seconds later it was 3-1 on a 2 on 1 rush that saw Demers again make the first save, but Alex Swetlikoff found the rebound first in the crease and put it home before Demers could recover. Ben Helgeson and Elan Bar-Lev-wise drew the assists at 10:01 of the second. The Bulldogs got their turn on the power play two minutes later, but despite some good chances couldn't cash in to make a game of it. The Vipers then went to back to back power play opportunities later in the period, but the Bulldogs stood tall on the kill to stay in the game. Shots in the period were 19-9 Vipers, for a 32-14 edge after two periods.

The third period saw the Bulldogs come out with good energy, creating a couple of chances early and drawing a power play three minutes into the frame. Despite a couple of opportunities, they couldn't beat Palaga as it stayed a two-goal hole. The Bulldogs fought hard to get back into it through the remainder of the period and again had a couple good chances around the net, but couldn't convert on them. The Bulldogs earned a power play with just under six minutes to play, but failed to generate much as the Vipers did a good job of killing it to hold their lead. Things got very interesting late in the game, with a long board battle with the Bulldog net empty was perhaps let go for too long, resulting in a series of cross-checks and a hard slash stick-swing after the whistle erupting, with the result being the Bulldogs drawing the only penalty. They would succeed in getting the puck into the attacking zone and again pulling Demers to make it 5-on-5, but more rough stuff erupted on a Ryan Miotto hit on the forecheck and an ensuing scrum that saw both sides earn penalties. The Officials initially had the faceoff set in the Bulldog end, before moving it the length of the ice into the Vernon zone allowing the Bulldogs to again get their goalie out to make it 5-on-5 in an effort to get back within one. The Vipers would successfully defend their net, with a shot block ending up out of the zone where Jesse Lansdell found Alex Swetlikoff over the Bulldog line, where he set up Jagger Williamson in the crease for the empty net power play marker to make it 4-1 with 1:04 to play. The Vipers would earn a final power play with 30 seconds left, when Evan Googins was called for spearing in retaliation to a hit from behind he didn't like. The Vipers rubbed some final salt in the wound with their fourth power play marker of the night on a nice slot deflection by Coleton Bilodeau top corner over the glove of Demers, with Teddy Wooding and Michael Young getting the helpers with 17 seconds left for the 5-1 final score.

Shots in the third were 9-9, for a game total of 41-23 Vipers, with Cole Demers taking the loss while Max Palaga earned the win. The Bulldogs went 1 for 5 on the power play, while the Vipers went 4 for 11.

With the loss, the Bulldogs have now dropped three straight games. They end their road trip tomorrow in Langley against the Rivermen, a 2:00 start.